Planters for the Front

I've always liked the look of houses in the neighborhood that had planters along the front. I didn't think I would ever put them in because I didn't feel that strongly to spend the money on the materials and time but last year, I was given a bunch of cedar from a nearby deck demolition and the idea came to me to use it for this project. 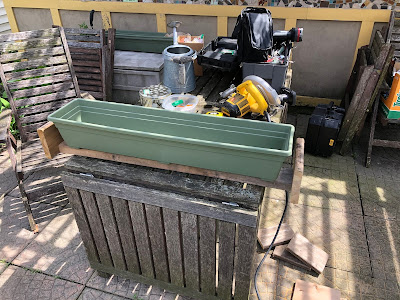 I designed the planters around existing 36" planter containers I found on clearance at a garden store. The idea was to create a box that I could just drop these planters into, making them easy to care for and change out when needed. 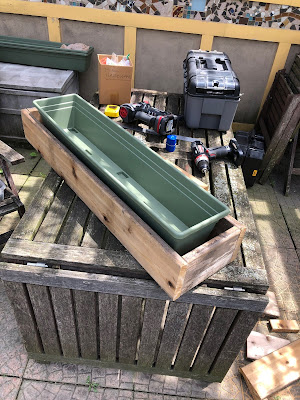 I don't have the highest degree of carpentry skills but I certainly have enough for some simple boxes that could hold the planters. It took less than a couple hours to cut down the wood and assemble all of the boxes. 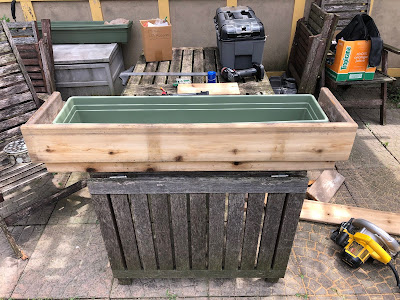 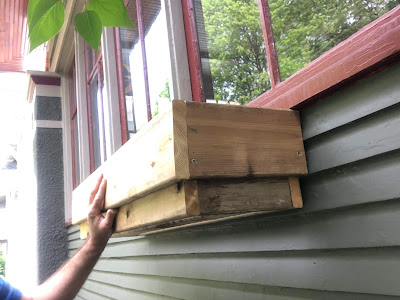 Once assembled, I painted them the same color as the exterior trim. I was initially going to leave them exposed but decided they looked a little too rustic that way and the painting was in order. Between the finished cedar and stainless steel anchors used to hold thigns together, I think these should hold up for a long time. 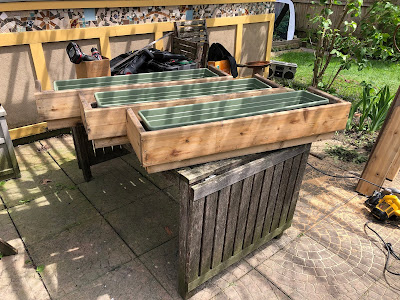 I mounted the wooden boxes with three 6" strap anchors each, screwed to the back of the box and then mounted with a cabinet screw to the face of the porch. 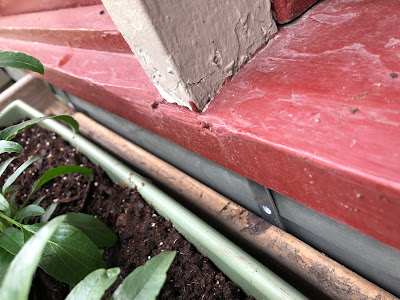 The porch is broken into 6 sections across the front, with 5 of those sections having windows and one has an opening at the stair. I centered each box on each paired section. 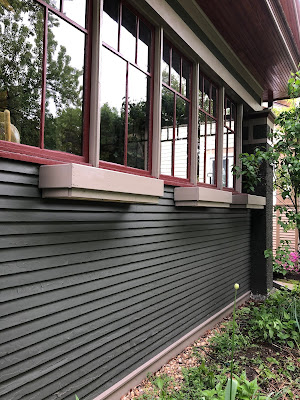 I chose a simple array of trailing and upright plants for the boxes so that purple sweet potato and vinca plants will trail down the front of the boxes. In the center are blue "cathedral" salvia plants that will be bushier and taller. I've used all of these plants in the past in containers in the garden so I know that they will do well in the sun up front as long as I keep them watered. 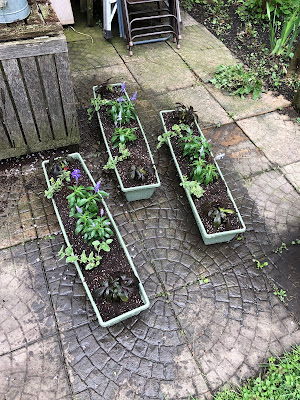 I am happy with the overall look and the planting and mounting took about a half hour to complete. All in all, with time for paint to dry, It took two days but relatively little time for the project. 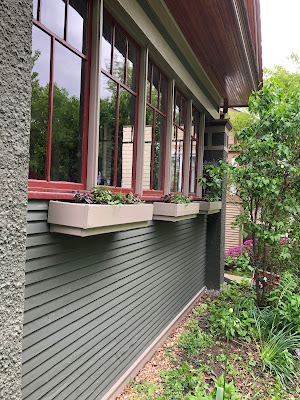 I am looking forward to seeing how they fill in over time. I've spent quite a bit of time in the front garden this year, since the painting and work is just about complete out front. It has taken a beating during the siding repair and painting so it hasn't looked "right" in a couple years. It is nice to have at least a small part of the place looking "finished". 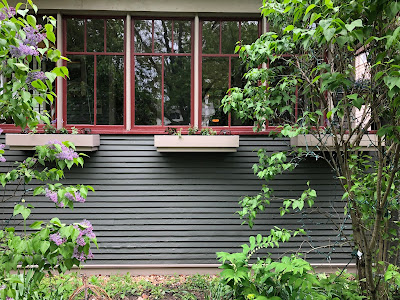 My work in preservation in the OP

I am sure that you can tell by this blog that I can get pretty passionate about preservation issues. Earlier this week, I was invited to be on a podcast that raises discussion about issues in the Oak Park community, hosted by Village Trustee, Dan Maroney.

I am always apprehensive of such things but I think Dan does a decent job at trying to raise issues and he's a good listener so I agreed. The podcast went public yesterday and hits on a lot of topics from this blog to my the city of Buffalo and why I find it inspiring to hot button issues facing Oak park homeowners and our community that relate to Historic Preservation.

If you have any interest in any of this, I hope you will take a listen:

I got obsessed with getting a rocking chair this fall. I went hiking in the Adirondacks and we stayed at an old cabin that had several comfortable Craftsman style rockers. I had been keeping an eye on the various online auction and sale site and pretty much resigned myself to the thought I'd never find one. 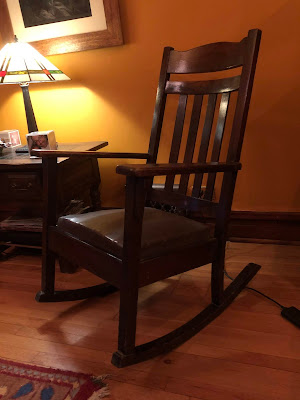 To my surprised, one came on the market at a good price. It was a solid oak piece that was just the size and style I was looking for. The chair had been refurbished once before but so long ago that it had a lot of wear. Some joints needed reinforcement, the main leather and springs in the seat weren't very comfortable and the shellac finish was chipping and uneven. 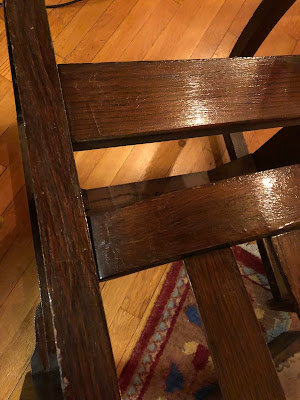 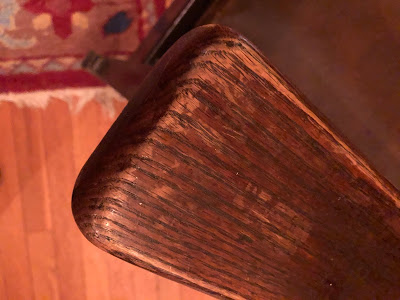 I decided to take on refinishing and re-upholstering the chair. Luckily the shellac came of relatively easy with some mineral spirits. 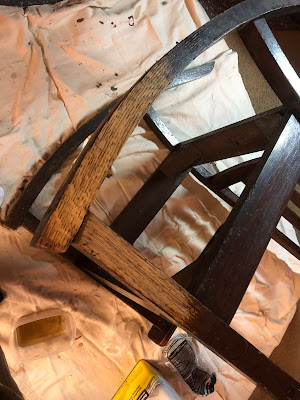 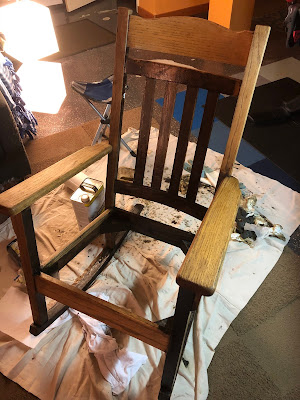 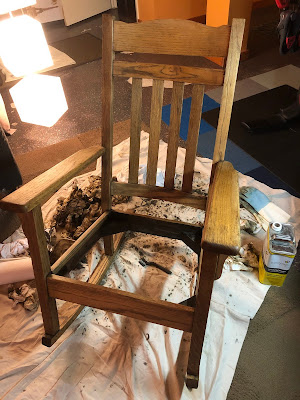 I applied a light stain and oil finish just a hint darker than the original wood so that you could see the character but so that it didn't look brand new. 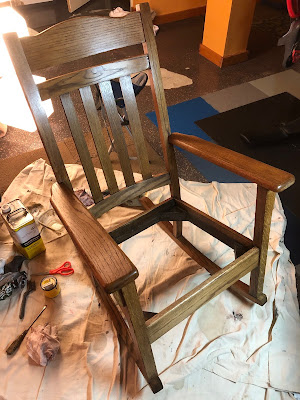 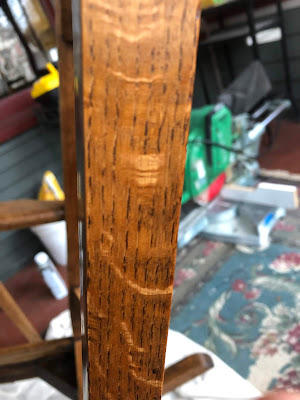 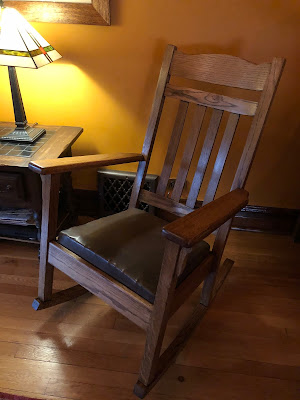 I got a piece of leather at a local fabric outlet. An aside: if you are ever looking for any type of fabric for a project, this is the Textile Discount Outlet in Chicago's Pilsen neighborhood has to be the best resource in the entire Chicagoland area. Floor after floor of fabrics and leather of every type you can think of. 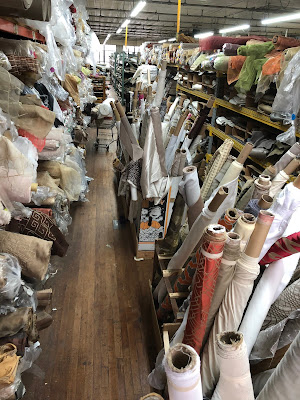 Anyway, I removed the old spring seat and put in new webbing and padding to create a new one. 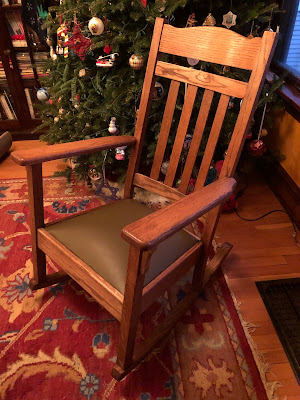 I am pretty happy with the outcome and for the first time, we have more than one seat in the living room. Here is a before and after so you can see the progress. 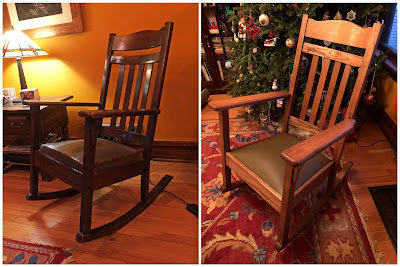 Since I had already been paying attention to all of the local furniture ads, I soon became aware of another piece that I loved: an antique oak settle. I didn't plan on these purchases but am happy with the change. The new furniture fits the place perfectly and we really couldn't be happier. 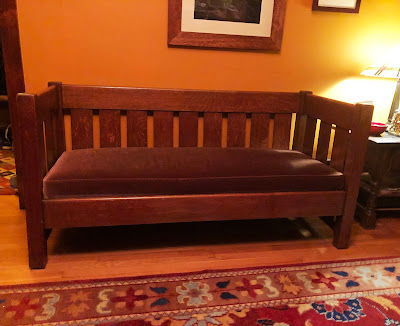 An end to another painting season

I woke up to snow on the ground this morning and this is what things look like out behind the Tiny Bungalow. I guess it is safe to say that another painting season has come to an end. The north side of the house and gable work are going to have to wait until the spring. 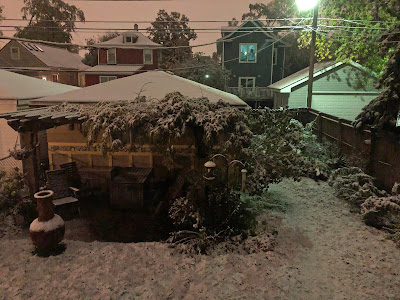 Luckily I had a good weekend and was able to get most of the south side finished though. I'd like to get another coat on things if there is a warm up but otherwise, it is looking good. 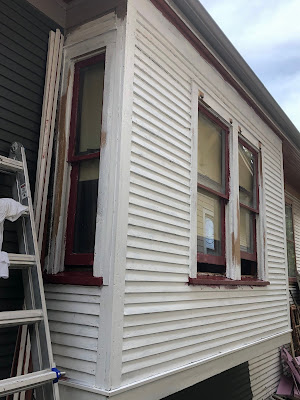 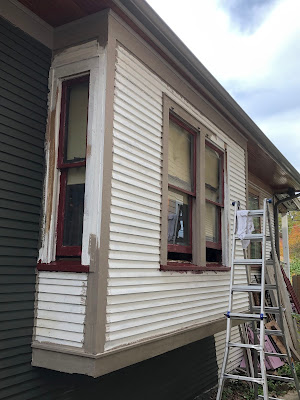 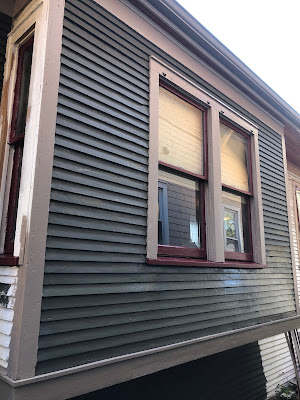 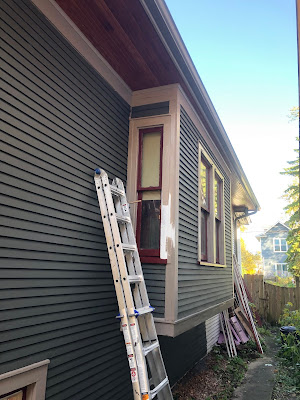 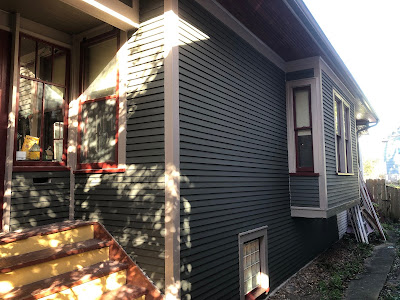